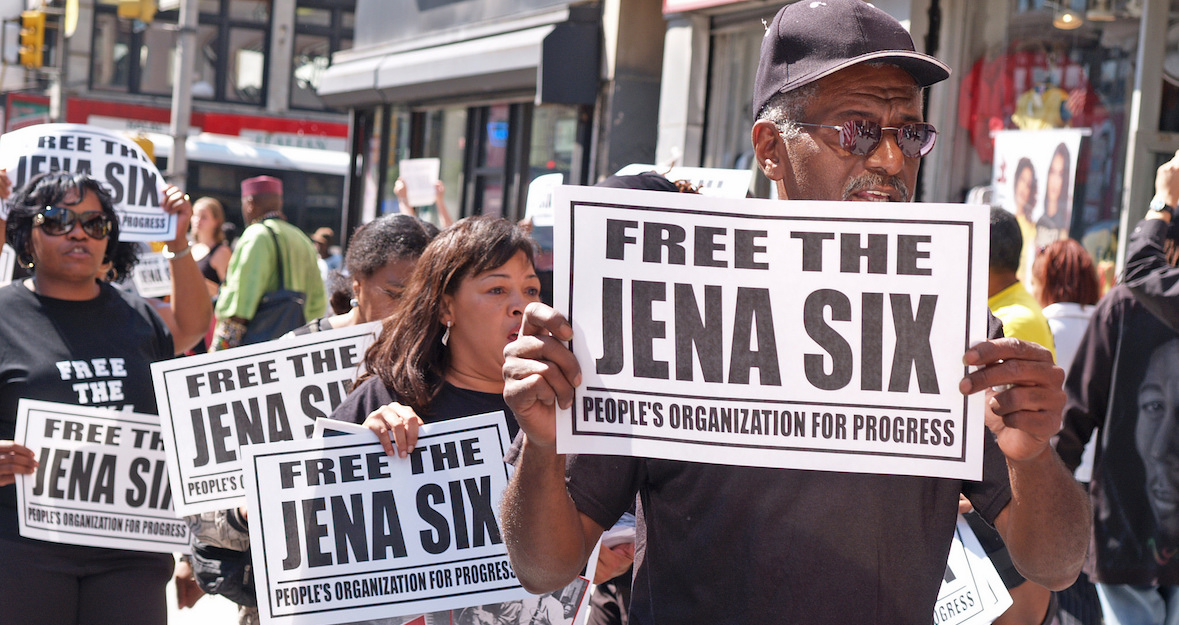 In 2007, Color Of Change rallied our emerging community to bring a national spotlight to the Jena 6: funding a new legal team, forcing abusive officials to face national scrutiny, and changing the course of events.

When two Black high school students sat under the “white” tree at school, white students responded by hanging nooses. When Black students protested, the local District Attorney told them he could take their lives away “with a stroke of my pen” and dismissed them. The DA did nothing in response to continuing attacks and threats against Black students. But when a white student was beaten up, he charged six Black teenagers with attempted murder.

We like to think stories like these happened only decades ago, but this story is from 2006. And it was all too familiar for Black people in America—a modern form of Jim Crow culture.

Soon after the six Black students in Jena, Louisiana were targeted unfairly for vicious and abusive prosecution, the early members of Color Of Change helped galvanize a national movement for justice and accountability. Our email telling the story of the Jena 6 spread virally, reaching hundreds of thousands of people. As Black folks and allies across the country learned what was happening, we made sure they also understood the need to act, and could see a clear path for getting involved in a meaningful way.

As awareness and action increased, so did our power to change the course of events for the students. More than 320,000 people signed our petition demanding justice, greatly increasing our membership in the process. Tens of thousands of our members donated more than $250,000 to hire a new legal team for the Jena 6, giving them a much more powerful and equalizing voice in a clearly biased justice system. More than 10,000 Color Of Change members marched in Jena, and more than 5,000 participated in local actions across the country.

Just as important as driving action was drawing major media attention to Jena—reining in the abusive and unchecked power of local officials, and creating new and real consequences for perpetuating the racism of the status quo. We demonstrated the importance of this story, influencing CNN and major national papers to cover it, and connect it to larger trends.

Because of the public scrutiny and the strong legal team funded by Color Of Change members, the local judge was removed from the case and the charges against the Jena 6 were greatly reduced. After three years of clearly unwarranted, unethical and racially-motivated prosecution, the students were able to plead no contest to the charges, and faced no jail time.

We turned the racist status quo into a political liability for the authorities in Jena, a strategy we have pursued continuously in the decade since, and which we are taking to the next level today through our initiative focusing on unaccountable prosecutors across the country.

The Jena 6 campaign was an early example of the power of social media to focus attention and resources on injustice in a strategic way. We forced the national media to cover a story they would have otherwise ignored, creating immense pressure on local authorities, and sparking a national conversation about race in the criminal justice system. That was possible because we created a way for Black people and our allies—organizing online—to sidestep the traditional media and expose the truth in a way that galvanized a national movement for justice, thereby drawing the national media into the story on our terms.

This campaign set the stage for many campaigns to come, by demonstrating what can happen when Black people mobilize both online and offline through strategic, collective action, creating and leveraging independent power on behalf of our communities.