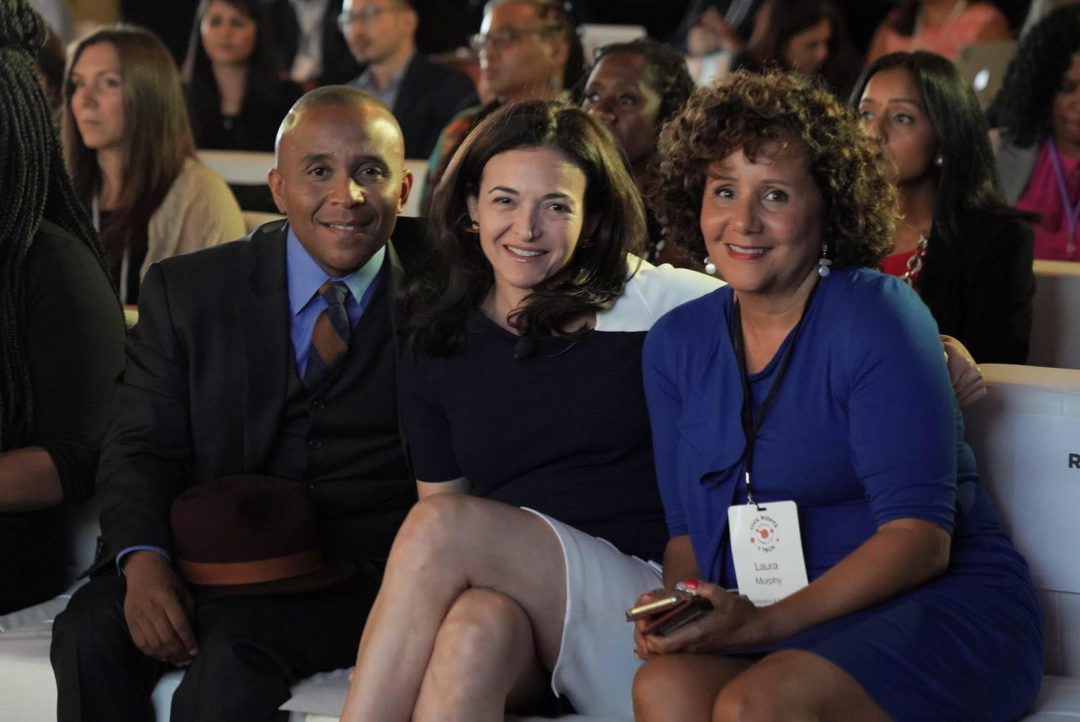 In different ways, for each of us here, for all of us here, this is a big moment. We’re taking a big new step by being here together.

Whether those at Facebook, or those in advocacy, or those in communities from Atlanta to Oakland, we have all worked so hard to make possible and real what this meeting represents.

But I want to be really clear about what we’re here to do today. We’re here to talk about racism. How racism works. And who it harms.

We’re here to talk about more than just one person’s safety, or rights or freedom. As life-or-death as they may be, the truth of this conversation runs even deeper than that.

Racism is highly adaptable. You block it in one area, and it attacks in another. Even when people are trying hard to do right, it finds its way in. Whenever there are incentives to focus on profit and power, people are going to get hurt along the way. As long as some people are able to profit from racism, it will keep pushing to take over any system it can.

So the problem of racism is different. Even more challenging than other forms of security. And the process of solving for it is very different, and it’s going to be uncomfortable. It’s uncomfortable because people who see themselves as being able to do anything find themselves out of sorts, almost not knowing where to begin, and realizing profound gaps in their expertise.

It’s uncomfortable because we all speak very different languages, and have different starting points in terms of what is most important to us. While we may talk in the language of shared values, we’ve actually had to work incredibly hard to establish shared values, and prioritize them.

And, to be clear: tech corporations, who were given so much leeway for so long, turn out to be not good at this. They’re just not good at it. Which isn’t surprising, because neither is any corporation in any other sector. They need help.

And that is the nature of this partnership: being clear about how this deeply historical set of injustices we call racism are incentivized in this relatively new industry; and being clear about the strategies and resources and focus it will take to rewrite the rules of this industry in favor of justice.

So that’s what we’re going to get into today. We will talk about many different ways racism works, and the interventions we can make. To ensure equity and justice. To ensure safety and freedom.

This day has been designed so well. With so much intention and clarity. I want to thank Brandi Collins-Dexter and the Color Of Change team. All of the speakers and moderators. Thank you Gia Peppers for facilitation of the day. Thank you Faith Campbell and Kimberly Wilson, who have worked tirelessly to pull this event off.

I want to thank Sheryl Sandberg, who has truly brought new energy, savvy and drive to solving these problems, in taking over the Civil Rights Audit. She has become such an important partner. We do not all agree on everything, but we keep pushing each other, which ultimately pushes us all forward.

Can the Tech Committee stand up to let us thank you, too? This team supported outreach for this Town Hall, and helped us connect to other Black technologists and entrepreneurs. They’ve also helped lead a discussion about the challenges of being Black in the tech industry, and the types of changes that are needed.

And thank you to those who helped us get here: FreePress, Center for American Progress, Media Justice, the United Church of Christ, the Lawyers Committee and Muslim Advocates. And the Southern Poverty Law Center, who not only pushed for and supported this event with their voice, but did so financially, as well, paying for so many of us to travel here from out of town.

Getting here is a story in itself. The Color Of Change part of this story started, in many ways, with the story of someone living right here in Atlanta.

Aurielle Marie, from Rise Up Georgia, told us about Facebook pages that were explicitly espousing hate speech, encouraging public shaming, bullying and harassment of individual Black people. And at times calling for violence against those individuals. The threats included calls for lynchings, and at least one incident calling for a Black woman to be placed on a spit like a pig.

Pages were routinely posting detailed personal information of Black people, not only their Facebook profiles, but also their phone numbers, email addresses, home addresses, and places of work for the express purpose of on and offline harassment, bullying and intimidation.

We found that other activists across the country were experiencing the same thing. When they were being flagged to Facebook, they were being told they didn’t violate community standards.

Men with guns had showed up to Aurielle’s workplace. Her crime in the eyes of these men was that she dared to fight for Black lives.

After Color Of Change met with staff in Menlo Park to discuss this and other pages, the pages were finally taken down. Some might say that was the system working. But we knew it meant the opposite: the system was working against us.

We now know hundreds of people who have felt varying degrees of threats from people on and offline, who represent thousands and thousands more. Our member Michelle, who was harassed online after the Women’s March by a man intentionally searching for women within a 30 mile radius to threaten. Our member Tracey, who was called a racial slur against Asians, but was the one put in “Facebook jail” when she complained.

Korryn Gaines, a 23-year-old Black mother, murdered in her own home by police, her five year old son also shot by police. We will never know the full story of how her life ended because her Facebook Live feed was cut off at the request of police.

Since 2015, we had been negotiating with Facebook to protect Black users. We  pushed for an end to relationships with predatory data mining companies, particularly those targeting BLM activists and selling their information to law enforcement. We also pushed for more transparency around their appeals process and decision making.

In the aftermath of the death of Korryn Gaines, and in partnership with national partners like Media Justice, we called for an independent “Civil Rights Audit”, which other groups like Muslim Advocates later joined, helping to build the momentum required to make it real.

Critically, Laura Murphy got involved, having played an essential role in previous other civil rights audits, like the one many of us worked on with Airbnb.

The independent audit is a company-wide mapping of human and civil rights rights impact and risk. The audit spans employment practices and oversight; privacy and content; algorithms and advertising; misuse, unintended impact and more.

We called for the audit to systematically identify these issues and then make a concrete plan to fix them, revising policies and practices to prevent future risk. This includes ensuring that there is lasting, permanent infrastructure to ensure safety and justice, not just under one department but across the entire company, and across Facebook, Instagram or WhatsApp.

What would—and should—a just business model look like? That is the core question of the audit.

We’ve worked with Facebook on critical issues ranging from predatory food marketing towards children to putting in place basic privacy protections while also ensuring the safety of our communities. So many issues like that are at stake in our work together.

Color of Change and a half dozen other civil rights, anti-hate and open internet organizations also developed a set of transparency, policy and governance proposals to address the numerous problems around hate and censorship at Facebook and other tech platforms. Implementing the proposals in “Change the Terms, Reducing Hate Online” will be a step toward seriousness.

We will discuss so many individual issues today. Yet, the solutions we discuss must be integrated. As integrated as social media is within our lives, and within our politics and society overall. Piecemeal solutions to persistent, systemic harms is never an answer to questions of justice.

So let’s work together today to ask the right questions. And hold a high standard for getting to the right answer.

As those who care about racial justice, and justice for all people, millions upon millions of people are depending on us to get this right.