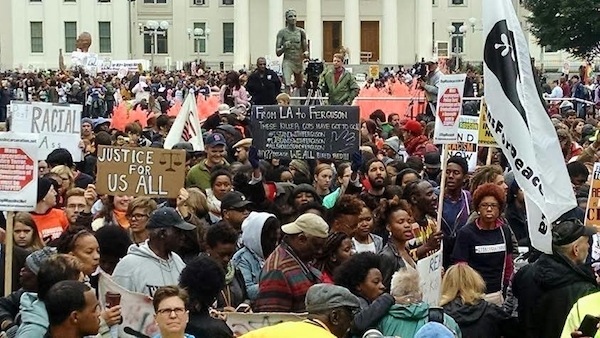 ColorOfChange.org launches @KilledByCops on Twitter and calls on Obama administration, Department of Justice, and other federal agencies to enforce a higher standard of policing

New York, NY — Today, ColorofChange.org, the largest online civil rights organization, launched a campaign calling on the federal government to implement systemic reforms to transform nationwide policing and increase accountability and oversight of law enforcement. From unwarranted stops to police killings, police departments motivated by dangerous and dehumanizing stereotypes disproportionately target, harass, and often kill Black and brown youth and adults — with no consequence. Police departments are not required to report these killings to the FBI or other federal agencies, meaning the full scope of the crisis has yet to be delineated. Current data indicates that police kill Black Americans on average at nearly the same rate as Jim Crow era lynchings.

In calling for a comprehensive, public, national database that tracks stops, arrests, and use of force, ColorOfChange launched @KilledByCops, a twitter stream in remembrance of people killed by law enforcement that will tweet out the name of people killed by law enforcement every hour (data provided by FatalEncounters.org). The development of a national database will allow federal officials to identify patterns of misconduct, hold individual officers and departments accountable, and address the policies that incentivize police brutality. It is also critical that the database include key privacy protections, the exclusion of personally identifying factors and information, and deportation immunity for civilians.

“We wish @KilledByCops was not necessary, but our federal government must take action to address nationwide police killing. By tweeting out the name of a life lost to police violence every hour, we aim to expose the devastating scale of police violence while demanding data on just how often police violate our civil and human rights. The public has a right to know the scale of police killings nationally; how many people are killed, harmed, stopped, arrested; where did encounter take place; demographic information; who was the police officer; and under what circumstances. By launching @KilledByCops, we aim to maintain a national spotlight on the crisis of discriminatory policing and misconduct, and increase pressure on federal officials to start collecting such data.”

In addition to @KilledByCops, ColorOfChange has also launched a number of concrete national reforms that may be found at the links below:

ColorOfChange Executive Director Rashad Robinson stated, “During this national crisis, the federal government has a clear role to play in setting a higher standard of policing for federal, local, and state law enforcement. The threat and horror of losing a loved one to police violence or an unjust arrest is a daily reality in the lives of Black communities. With Ferguson’s all over the country, we need President Obama, US Attorney General Eric Holder, and other federal agencies to move forward key reforms to transform policing across the country.

“National leaders are paying more attention to racial profiling and police violence than they have for years, due to the hard work of Black youth and community leaders in Ferguson and across the country. We stand in a historic time, which calls for historic measures. As we continue to work to secure full accountability for the brutal police killings of Mike Brown, Eric Garner, and Ramarley Graham, we demand definitive federal action to expand and strengthen investigations of biased and violent policing, improve the collection of data on police use of force, and an end to federal grants that incentivize bad policing.

After Ferguson Police Officer Darren Wilson tragically killed 18-year-old Mike Brown, nearly one million ColorOfChange members and their allies called on the Department of justice to prosecute Officer Wilson to the fullest extent of the law. The campaign may be seen here:

Rashad Robinson continued, “Public officials, many of which leveraged the power of the Black vote to gain office, must be held accountable for addressing some of the most pressing injustices targeting Black communities. We will not sit silent as our children, parents, and loved ones are criminalized and brutalized by police and we are committed to working with the executive branch to ensuring that law enforcement and the criminal justice system protects the civil and human rights of all communities. “