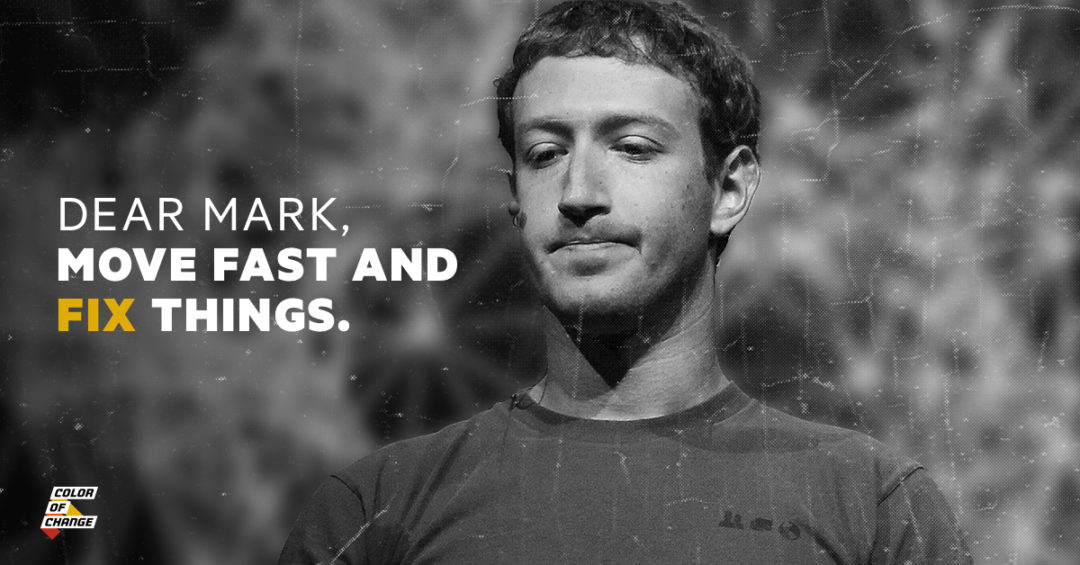 Color Of Change Secures Key Concessions At Meeting with Sheryl Sandberg, Though Company Refuses to Turn Over Details of Definers Attacks on the Organization

PALO ALTO – After years of delay in implementing changes that address sharply growing concerns over treatment of Black users and communities of color, Facebook yesterday agreed to publicly release by the end of the year a progress report on a civil rights audit demanded by Color Of Change, the nation’s largest online racial justice organization. Since 2016, Color Of Change has been demanding the audit, along with partners, over concerns about hate speech, doxxing, voter suppression and Facebook’s failure to protect the safety and security of Black users and users of color.

At the meeting, Sandberg apologized to Robinson and Color Of Change for Facebook’s actions while distancing herself from the work of the Definers Public Affairs and refusing to commit to release the details of the company’s engagement with the firm.

Sandberg committed to Color of Change that Facebook will:

While Facebook made some meaningful commitments to change, the response was insufficient to the harm done and Color Of Change will continue to press on all of the demands (see below).

After the meeting, Color Of Change issued the following statement from President Rashad Robinson:

“In yesterday’s meeting, Sheryl Sandberg made an apology to Color Of Change for the anti-Semitic and anti-Black smears orchestrated by Definers Public Affairs and also committed to a public update on the civil rights audit by the end of the year.

Hours after the meeting, more was revealed about Ms. Sandberg's role in obtaining opposition research. Facebook can show its commitment to transparency by turning over all of the files prepared by the PR firm to discredit Color Of Change and Facebook’s critics.

Facebook, like much of Silicon Valley, desperately needs a cultural transformation. Leaders must see that addressing the needs of Black users and employees, collaborating with civil rights groups to correct existing issues, and rooting out the internal forces hostile to civil rights are essential for the company’s future success.

While we were pleased to hear that Facebook will release an update on the status of the civil rights audit by the end of the year, Joel Kaplan’s continued role as the head of the policy team compromises the audit’s integrity. Not only has Kaplan worked with both the founder and president of Definers Public Affairs in the Bush White House, but recent reports also indicate his Washington, D.C.-based policy team oversaw Facebook’s relationship with the firm. His fingerprints are all over the roadblocks mounted to stall the civil rights audit and undermine our work.

We communicated to Ms. Sandberg that Facebook has a lot of work to do to gain public’s trust, and failure to follow through and act will lead to a continued escalation in demands for accountability from Americans of all backgrounds, lawmakers and shareholders. At Color Of Change we remain committed on behalf of our members, the Black community and everyday people to holding this massive corporation and communication platform accountable. Time will tell how committed Facebook’s leadership is to real change but make no mistake Color Of Change and our 1.4 million members aren’t going anywhere.“

Since 2015 Color Of Change has been at the negotiating table with Facebook pushing the online platform to protect Black activists who were being doxxed by white supremacist and white nationalist groups. Color Of Change expanded its interactions with Facebook after the platform deactivated the account of Korryn Gaines at the request of the Baltimore County Police Department.

Just last month, Color Of Change spoke to Facebook about the Change the Terms policy platform, which if implemented and enforced, would help to reduce the presence of hateful activities and online violence that manifest in physical violence.

Color Of Change and the Leadership Conference for Civil Rights sent a letter this week requesting the following parameters in order to ensure the civil right audit’s success, purpose, and integrity:

Color Of Change is the nation’s largest online racial justice organization. We help people respond effectively to injustice in the world around us. As a national online force driven by over 1.4 million members, we move decision-makers in corporations and government to create a more human and less hostile world for Black people in America. Visit www.colorofchange.org.

New York, NY—Color Of Change and Muslim Advocates, launched a joint campaign  today demanding that Facebook conduct a full, independent audit and investigation of its civil rights policies and anti-civil rights activities being hosted on its platform. Facebook’s continued lack of transparency around when and how they and law enforcement access our data highlights the company’s failure […]